Neil Bartlett has been making rule-breaking theatre and performance since 1983. After a controversial early career he was appointed Artistic Director of the Lyric Hammersmith in London in 1994; since leaving the Lyric in  2005 major cultural producers he has worked for include the National, the Abbey in Dublin, the Bristol Old Vic , the Manchester Royal Exchange, the Edinburgh International, Manchester International , Brighton ,Aldeburgh  and Holland Festivals , the Wellcome Foundation and  Tate Britain .

Neil is also an acclaimed author, with a whole shelf of novels, plays, adaptations and translations to his name. His most recent novel, Address Book, was published by Inkandescent in 2021 – and his very first novel, Ready to Catch Him Should He Fall  (1990) , has just been republished  by Profile as a Serpents Tail Classic

Opening in Derby  at the Derby Theatre on September 30 2022, then transferring to the Queen’s Theatre Hornchurch, this was a vividly theatrical new staging of Robert Louis Stevenson’s  exploration of masculinity in crisis. The specially commissioned gothic-with-a-twist script by Neil Bartlett brought a new and very contemporary perspective to this classis by putting some brilliant female characters front and centre in the story ; it was given a boldly physical production by Sarah Brigham and used an ensemble of just nine actors. The script has been published by Nick Hern Books – click here for more information –  and you can also watch a trailer for the show here-

Neil makes it to the West End ! His radical new staging of Virginia Woolf’s magical mistress-piece ORLANDO  took London by storm when it opened at the Garrick Theatre in November 2022, with a script by Neil Bartlett,  direction by Michael Grandage and  Emma Corrin in  amazing form in the title role. You can glimpse the show by clicking  just here, and read a review of it here.

The script of ORLANDO is published by Nick Hern Books; more information here

Commissioned by the BBC to honour Shakespeare’s birthday, this two-hour mash-up of Renaissance greatness for the radio has a sound-world reflecting our current state of war – and gives the words of the African characters of the play back to some blazing performers of colour. The company is lead by Adjoa Andoh as Cleopatra, and Antony is voiced by Tim McInnerny. You can access the piece on the BBC Sounds website ; try clicking here 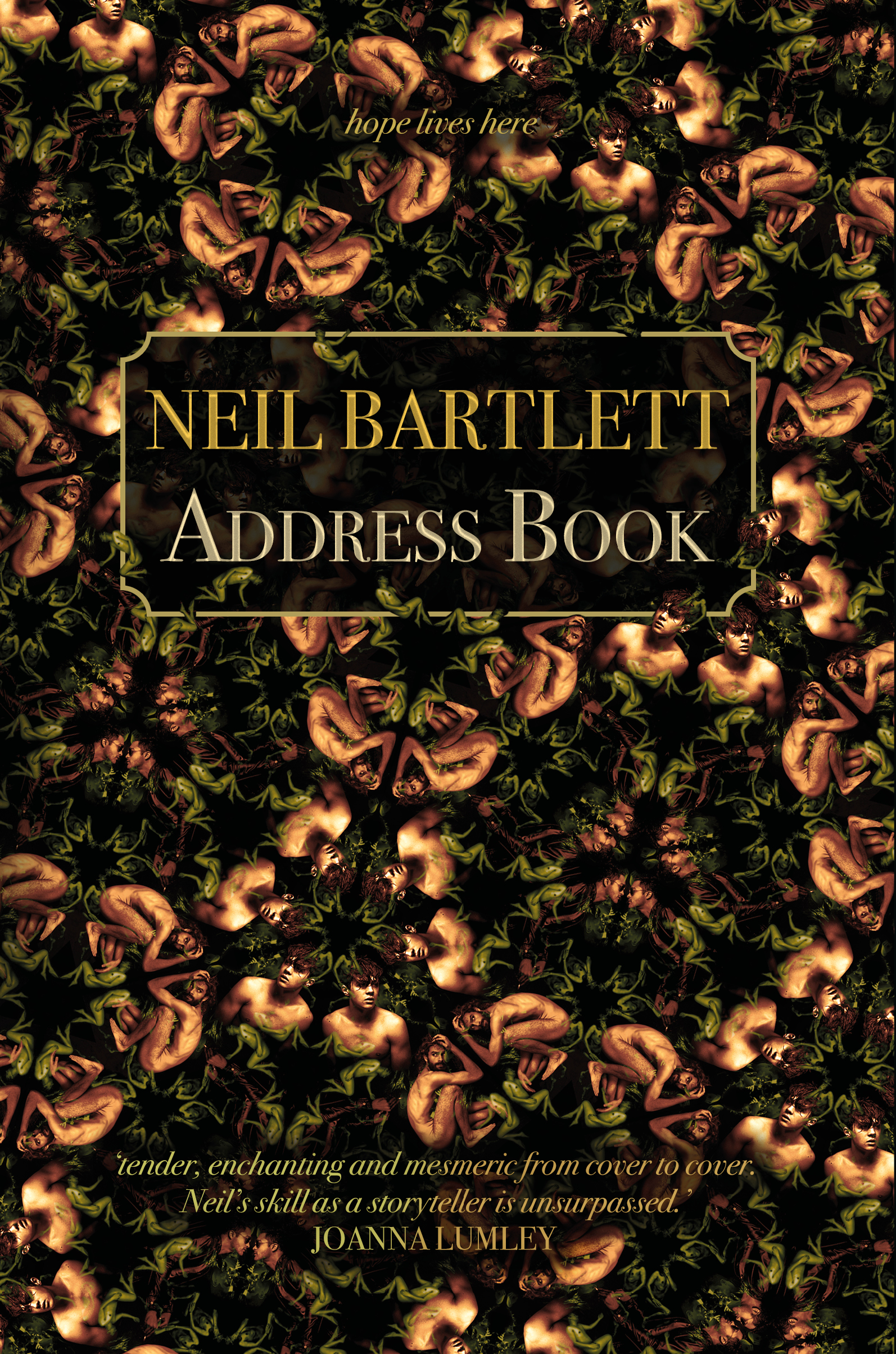 Neil’s first full-length fiction since 2014 has just been published by Inkandescent in London. Taking the form of seven interlinked stories, the novel takes the reader behind seven very different front doors – and on a journey through seven very different queer lives. The novel has been praised by writers as distinguished and diverse as Edmund White, Armistead Maupin, Patrick Gale, Deborah Levy, Patrick McGrath, Sarah Waters and Caryl Churchill – and was picked by Jackie Kay in the Guardian as one of the Books of the Year for 2021.

You can hear Neil talking about ADDRESS BOOK  here. 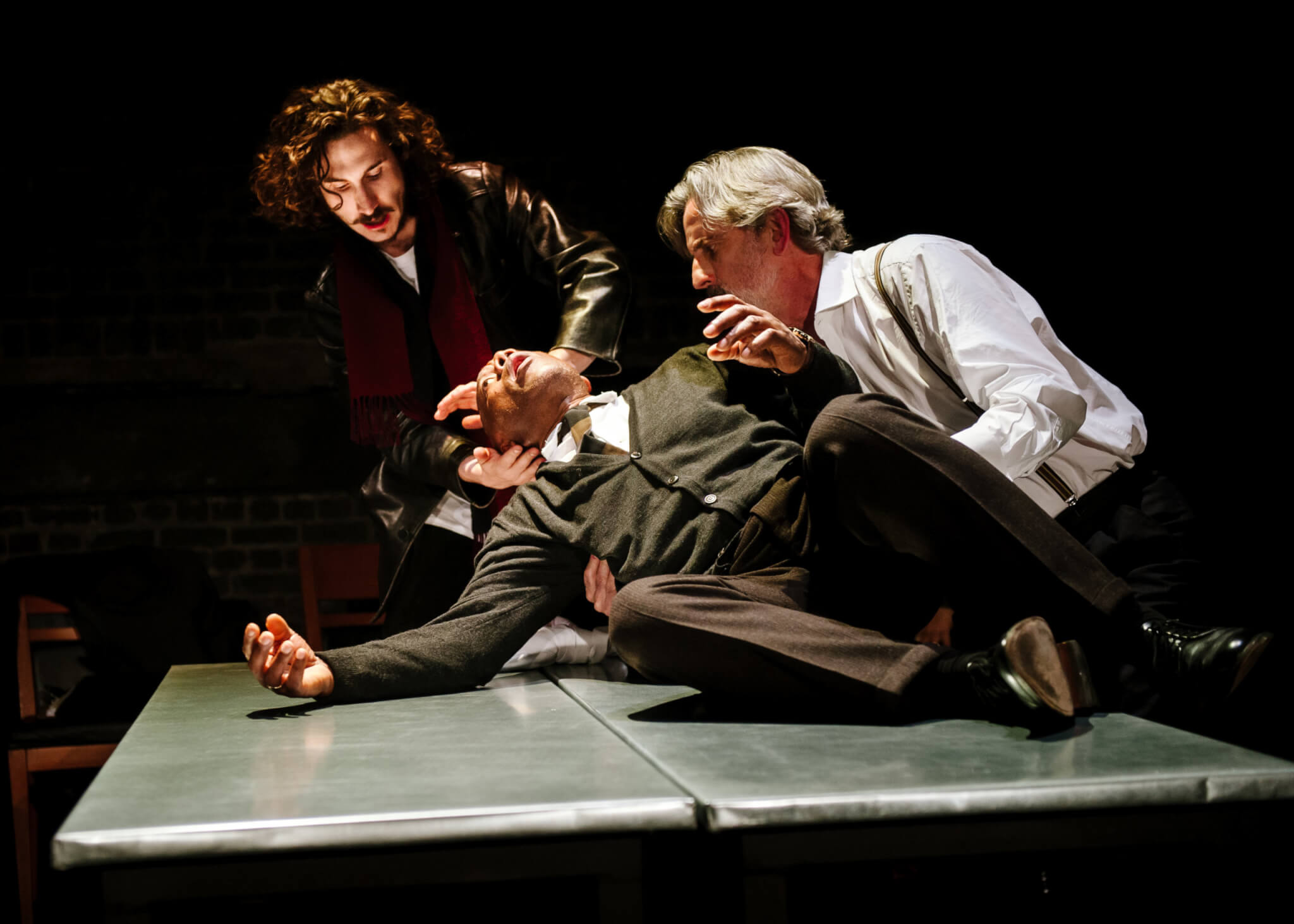 The piece of Bartlett’s work that everybody is talking about just now – as we all  struggle to come to terms with  the Covid19 pandemic-  is his powerful and timely adaptation of Albert’s Camus’s novel  THE PLAGUE. This was originally premiered on stage to sell-out audiences at the Arcola Theatre in London back  in 2017, and was revived there in 2018. In  July 2020,  it reached a whole new audience when  it was broadcast by  BBC Radio 4 as a made-in-lockdown radio drama – a production which shared an Outstanding Achievement Award in the 2021 BBC Audio Drama Awards. Meanwhile, the script has been performed in countries around the world, from Israel to Hong Kong to New Zealand. Because of all this interest, the script of THE PLAGUE has now sold out it’s entire print run. However, if you are a theatre or producer wanting to read the script with a view to production, please contact Neil’s agent  here , asking him to send you  an electronic copy – and meanwhile, you see can see and hear Neil  talking about the original stage production in rehearsal  here – and the radio version is available online via the BBC.

The Importance of Being Earnest 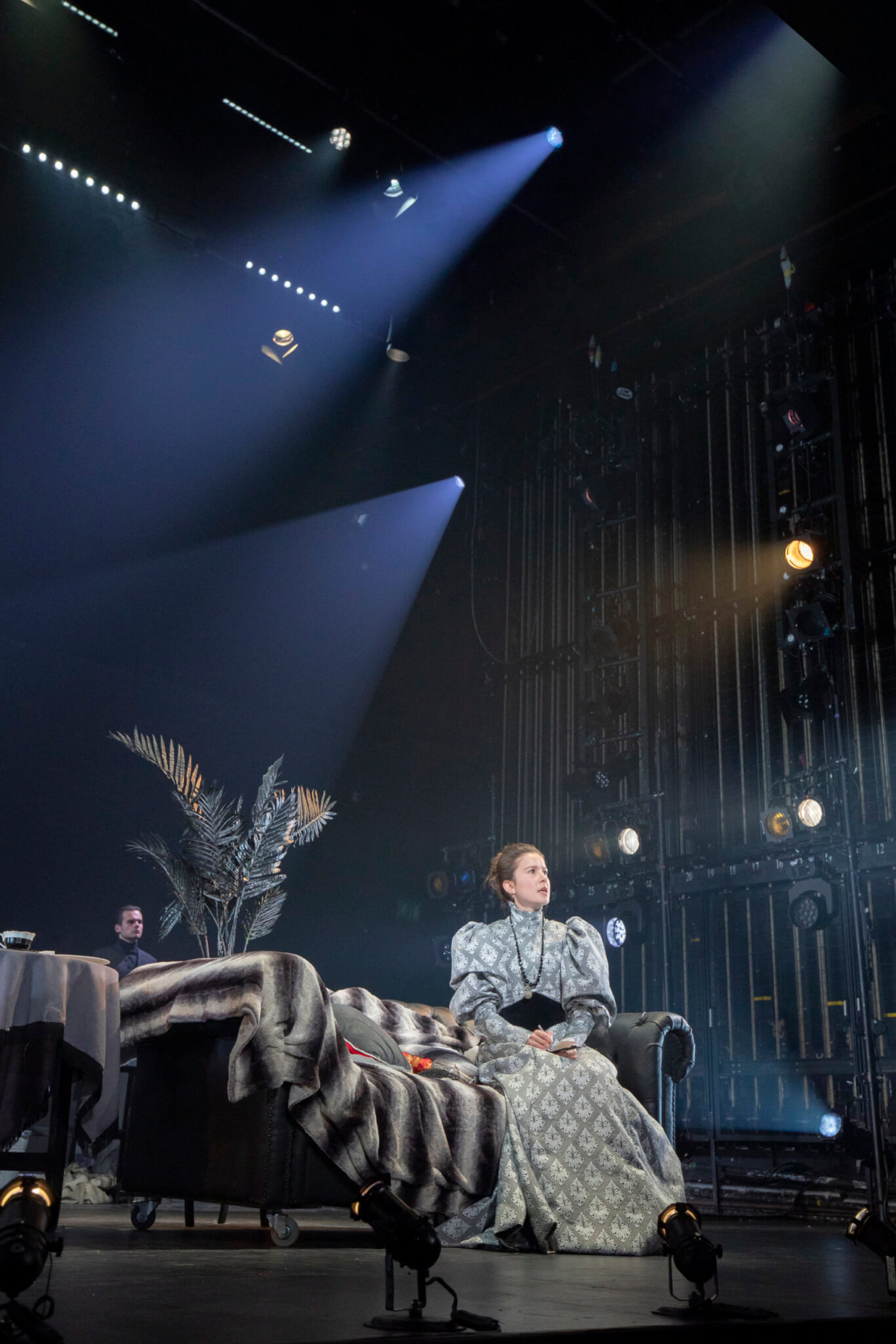 Just before the London theatres went dark in March 2020 , Neil worked with a company of  eight students  and up-and-coming young designer Grace Venning  to create a dramatic new staging of Wilde’s last play in the Vanbrugh Theatre  at RADA . A bare black stage – an axe, amongst the tinkling of teacups –  and a thousand pink roses falling from the ceiling provided the setting for a suitably sensational and heartfelt tribute to one of the writers Neil has been most closely associated with  throughout his career. 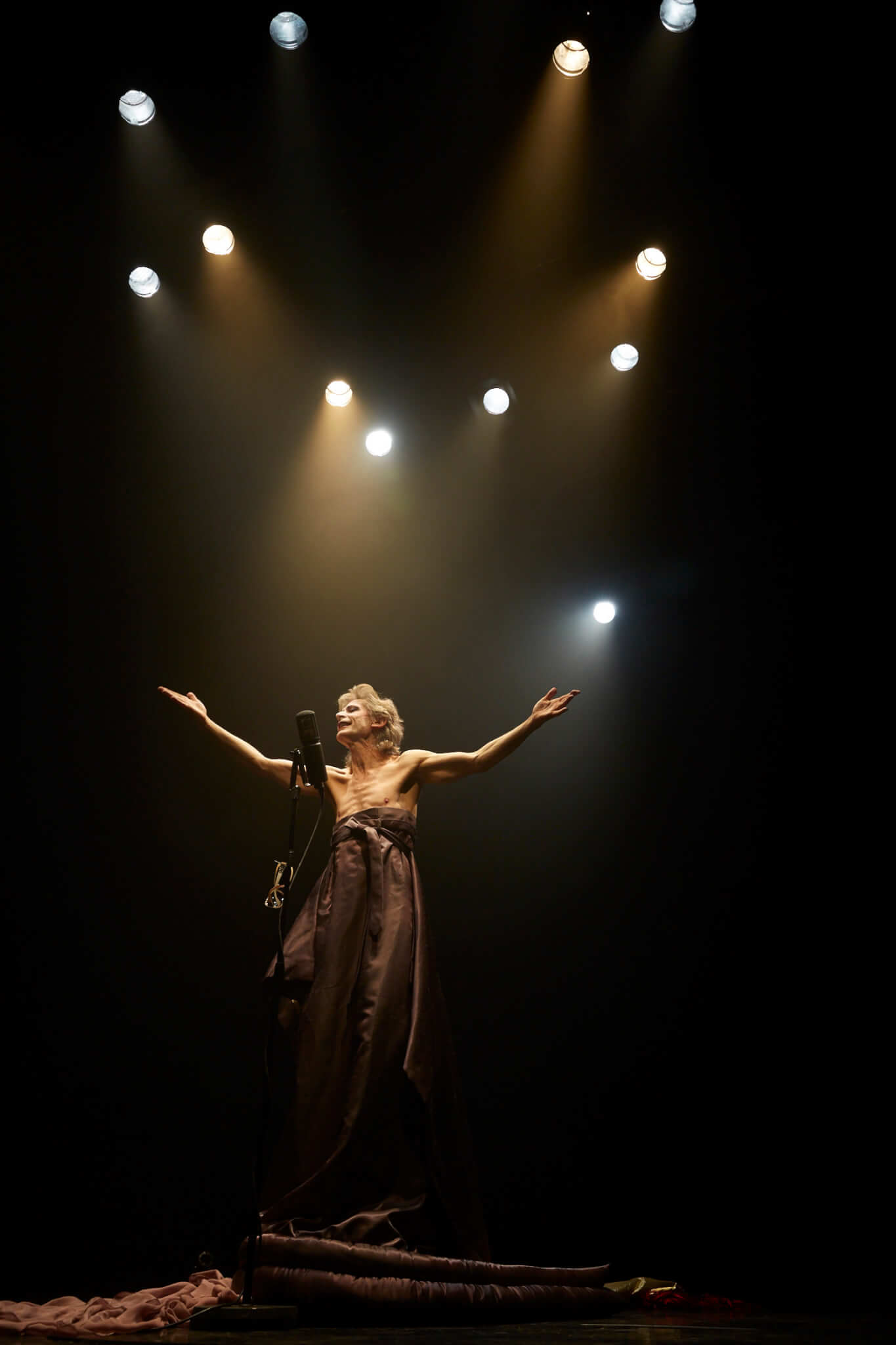 A sensational one-man re-invention of the classic Greek legend of otherness, rage and transgression. Text and staging by Neil Bartlett ( translated and adapted from the 2014 French play by J.R.Lemoine) ; solo performance by Francois Testory ; live electronic soundscape by Phillipe Von – and gown by the legendary Mr Pearl. MEDEA WRITTEN IN RAGE opened at The Place  in London and then went on an acclaimed  seven-city British tour in the autumn of 2017. The final UK performance of the piece was given on the closing Saturday night of  the 2018 Brighton Festival, at Brighton’s Theatre Royal.

You can see some clips from the show and hear some audience reaction to the opening night performance here.

A VISION OF LOVE REVEALED IN SLEEP 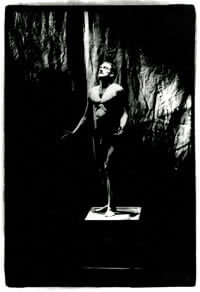 A VISION OF LOVE REVEALED IN SLEEP AT THE TATE

In July 2017 Neil was invited to revive his notorious 1987 solo performance piece  in the extraordinary surroundings of the pre-Raphaelite gallery in Tate Britain. The piece – dedicated to the queer Victorian painter Simeon Solomon – was first staged at the height of the first wave of the British AIDS epidemic , and this one-night only performance is an extraordinary chance to see the work again over thirty years later. You can watch a documentary film of the performance here.

You can also watch a short film of Neil talking about the show with Dominic  Johnson here. 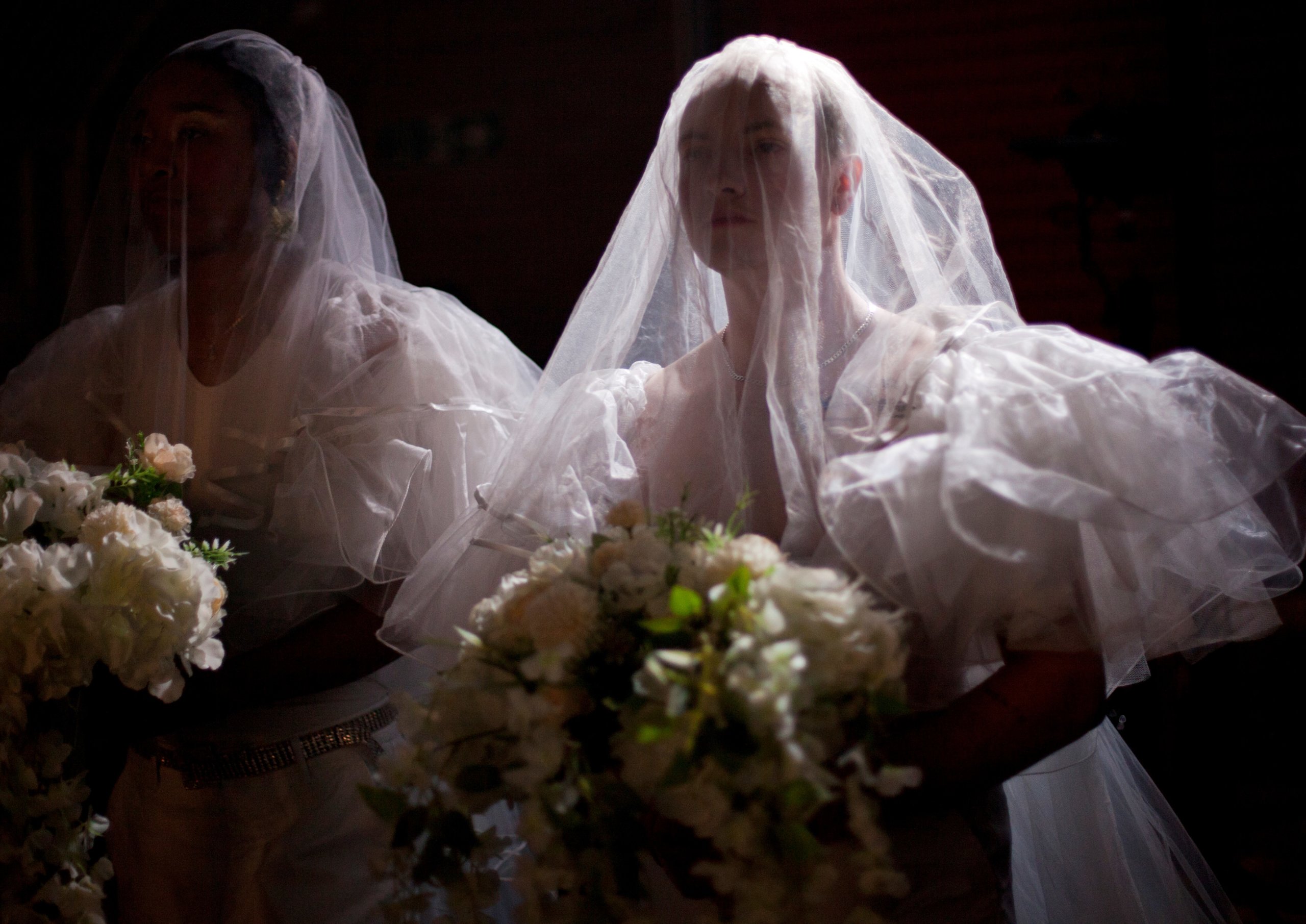 For one week only – in September 2021 – renowned performance provocateurs DUCKIE took to the streets and back alleys of South London’s Vauxhall to celebrate the  wild and wonderful heritage of queer life in the eighteenth century – and Neil was commissioned to provide the finale for the evening. Re-imagining a night in a Georgian Molly-House, he brought together an empty railway arch,  the sublime voice of singer Francois Testory ( reworking Henry Purcell’s “Frost Song”), the lip-sync wizardy of Dickie Beau ( mouthing to a recording of Neil delivering his text which he made in bed while under he was lockdown with Covid !!)  and a pair of blushing, beyond-gender “brides” to create a heartfelt tribute to all the lovers of London…….  and brought the house down. You can watch a film of the event here.

A solo six-hour live performance of Oscar Wilde’s love letter to Lord Alfred Douglas, performed in the chapel of Reading Gaol on September 4th 2016. Produced by Artangel as part of their installation project INSIDE. Bartlett’s marathon performance is now available online, and has  been watched around the world.

Created in and for a time of lockdown, Neil’s first new work since the beginning of the pandemic was a love-letter to an empty theatre. Commissioned by the Brighton Festival 2021, it took over the city’s dark and deserted Theatre Royal and for just one day – from dawn to sunset – made it a space for reflection on the year that we have all just been through. Working with an extraordinary team of collaborators – including a team of fifteen writers from the city, people whose voices came some of the communities hardest hit by the pandemic – Bartlett filled the theatre with an epic and ever-shifting landscape of  sound and light, using the empty and abandoned auditorium that has seen so much of his work in the past to bear a very particular kind of witness to not just our losses, but also  our strength. You can find out more about the work here.

In 2019, Neil was very proud to be asked to write the introduction to a new paperback edition  the final volume of Derek Jarman’s journals, SMILING IN SLOW MOTION – a highly personal reflection  on his meetings with Jarman and on the UK  AIDS epidemic in the midst of which they met.

.Neil also contributed an introduction to the re-issue of Jean Genet’s  astonishing  novel FUNERAL RITES by Faber and Faber . Another great honour- to be part of bringing a great writer ( and one of Neil’s favourites)  to a whole new generation of readers. In the same vein – bringing fresh and passionate insights to the work of his heroes – he also wrote the introduction to IN PRAISE OF DISOBEDIENCE , a new anthology of some of Oscar Wilde’s most provocative prose and journalism , published by Verso.

And….Neil’s very first novel READY TO CATCH HIM SHOULD HE FALL has just been re-issued in a beautiful new edition, with a specially written preface from Neil which reflects on the changes in queer life and culture that have taken place since this groundbreaking and now-classic book first appeared back  in 1990. 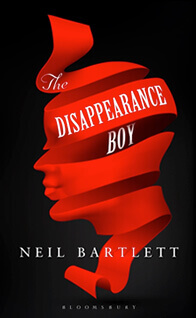 Neil’s acclaimed fourth novel was published in August 2014 by Bloomsbury, and reissued in paperback in 2015. This evocative tale of desire and illusion – set backstage in a seaside variety theatre during the Coronation summer of 1953 –  earned Neil a nomination as Stonewall Author of the Year. 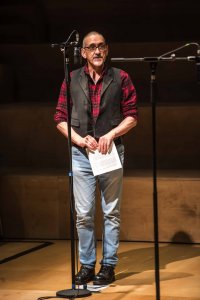 …a twenty-four-long performance; 48 actors; 237,000 words.  This extraordinary one-off event – Neil’s biggest-ever piece of work in a theatre –  went live on  Remembrance Sunday 2019 at the Royal Exchange Theatre in Manchester. Three thousand people turned up to the live event ; tens of thousands listened to a live simultaneous broadcast on Resonance FM. Performers in the event  included Toby Jones, Maggie Steed, Miranda Richardson, Julie Hesmondhalgh, Liz Carr, Adjoa Andoh…and 22 community members from across the city.  Neil himself performed – at four in the morning. You can find out more about the show – and access the full 24 hours of the live recording –  here.